My Dad Is Too Strong 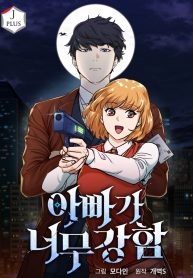 Lee Dojun was a desk worker for the government that was a part of the rift management team. One day, he got into an accident and woke up in the world of murim where he learned to fight and a single crucial skill. <Pocketwatch> was a skill that he had gained when he first appeared in <murim> and it resurrect him a day before after his death. Through many years he rose to the top of the ranks becoming the strongest, but just like that, he blinked and came back to the world he was originally from. Dojun continued to go to work and live at his home, but the only thing that changed was gaining a daughter through his “Dad Contract”.

I Became the Tyrant of a Defence Game